Our TRANSMEDIA ART HISTORY PROJECT includes collaborative learning, this mean that we will learn from our research as well as making others participate in learning, as our friends from Canada.

In this link you will find some questions that come up from Chimney Hill Elementary in Vancouver, we will share what we know, and we will have a SKYPE CONFERENECE discussion around them.
http://jvsfinearts.blogspot.mx 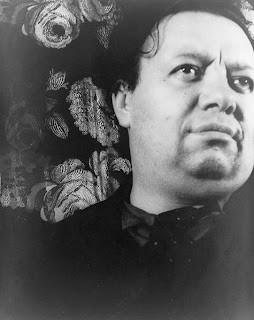 Diego María de la Concepción Juan Nepomuceno Estanislao de la Rivera y Barrientos Acosta y Rodríguez (December 8, 1886 – November 24, 1957) better known simply as Diego Rivera was a prominent Mexican painter born in Guanajuato, Guanajuato, and husband of Frida Kahlo (1929–1939 and 1940–1954). His large wall works in fresco helped establish the Mexican Mural Movement inMexican art. Between 1922 and 1953, Rivera painted murals among others in Mexico City, Chapingo, Cuernavaca, San Francisco,Detroit, and New York City.[1] In 1931, a retrospective exhibition of his works was held at the Museum of Modern Art in New York City.
Rivera was descended from Spanish nobility on his father's side. Diego had a twin brother named Carlos, who died two years after they were born.[2] From the age of ten, Rivera studied art at the Academy of San Carlosin Mexico City. He was sponsored to continue study in Europe by Teodoro A. Dehesa Méndez, the governor of the State of Veracruz. His mother was a Converso, a Jew whose ancestors had been forced to convert to Catholicism.[3] Speaking about himself, Rivera wrote in 1935 "My Jewishness is the dominant element in my life.[4]
After arrival in Europe in 1907, Rivera initially went to study with Eduardo Chicharro in Madrid, Spain, and from there went to Paris, France, to live and work with the great gathering of artists inMontparnasse, especially at La Ruche, where his friend Amedeo Modigliani painted his portrait in 1914.[5] His circle of close friends, which included Ilya Ehrenburg, Chaim Soutine, Amedeo Modigliani and Modigliani's wife Jeanne Hébuterne, Max Jacob, gallery owner Leopold Zborowski, and Moise Kisling, was captured for posterity by Marie Vorobieff-Stebelska (Marevna) in her painting "Homage to Friends from Montparnasse" (1962).[6]


n 1920, urged by Alberto J. Pani, the Mexican ambassador to France, Rivera left France and traveled through Italy studying its art, including Renaissance frescoes. After José Vasconcelos became Minister of Education, Rivera returned to Mexico in 1921 to become involved in the government sponsored Mexican mural program planned by Vasconcelos.[7] See also Mexican muralism. The program included such Mexican artists as José Clemente Orozco, David Alfaro Siqueiros, and Rufino Tamayo, and the French artist Jean Charlot. In January 1922,[8] he painted – experimentally in encaustic – his first significant mural Creation[9] in the Bolívar Auditorium of the National Preparatory School in Mexico City while guarding himself with a pistol against right-wing students.
In the autumn of 1922, Rivera participated in the founding of the Revolutionary Union of Technical Workers, Painters and Sculptors, and later that year he joined the Mexican Communist Party[10] (including its Central Committee). His murals, subsequently painted in fresco only, dealt with Mexican society and reflected the country's 1910 Revolution. Rivera developed his own native style based on large, simplified figures and bold colors with an Aztec influence clearly present in murals at the Secretariat of Public Education in Mexico City[11] begun in September 1922, intended to consist of one hundred and twenty-four frescoes, and finished in 1928.[8]
His art, in a fashion similar to the steles of the Maya, tells stories. The mural "En el Arsenal" (In the Arsenal)[12] shows on the right-hand side Tina Modotti holding an ammunition belt and facing Julio Antonio Mella, in a light hat, and Vittorio Vidali behind in a black hat. However, the En el Arsenal detail shown does not include the right-hand side described nor any of the three individuals mentioned. Rivera'sradical political beliefs, attacks on the church and clergy made him a controversial figure even in communist circles. Leon Trotsky lived with Rivera and Kahlo for several months while exiled in Mexico.[13] Some of Rivera's most famous murals are featured at the National School of Agriculture at Chapingo near Texcoco (1925–27), in the Cortés Palace in Cuernavaca (1929–30), and the National Palace in Mexico City (1929–30, 1935). 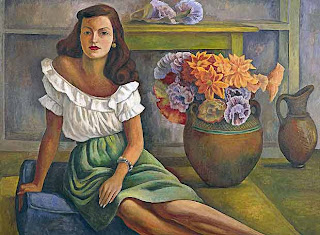 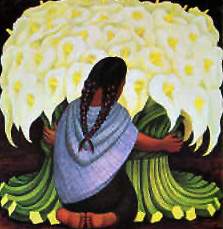 http://jvsfinearts.blogspot.mx
Posted by Unknown at 4:20 PM