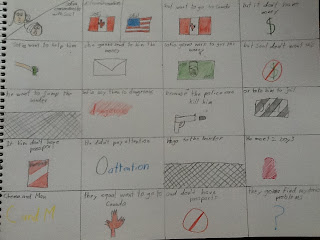 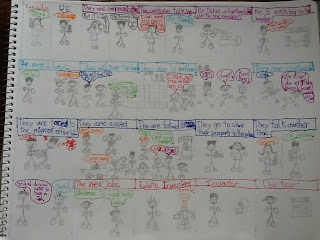 A girl ( Sofia ) of Canada comunicate with a boy ( Hector ) of Puerto Rico that travel to the United States, he was a discriminated because he was poor and he only have the money to travel to United States,The boy of the United States want to go to Canada, but he doesn't have the money to pay the trip to Canada and the girl makes a promise to him that she will work to earn money and when she has the money she will send it to him. But the boy said to the girl that he will jump the border between Canada and the United States,else you can't work because you are too young and a girl.The girl told him that sorry for can't help but don't jump the border, because is dangerous and the police can kill you or take you to the jail if you don't have passport. He didn't pay atention to her and he go to the border.

In the journey he meet 2 boys (Chema and Mau)

The boys offer to take saul to the border,saul ask why do they want to cross it,they told him years a go they were on a school trip to study in canada and the policeman did't let Chema pass because he is black skin, and now we want to go to the United States to have a job.

When we get to the other side of the border the police saw us and we had to run very fast, but police reach us.
The policeman and the policewoman take us to the migrant office,but before we arrive a boy and a girl saved us.when this persons saved us we went directly to an office where we can make our passport.then we go to show our passport to the police. Then they return to a house were Hector talked another time with Sofia, he says that now he have a passport and she get happy.

Two persons show us some jobs and Saul decide to be an inventor, Mau decide to be a Robotic Engenier, and Chema a doctor. Since they were not discriminated they became productive people.
Posted by Jules Verne 7th grade students at 12:01 PM